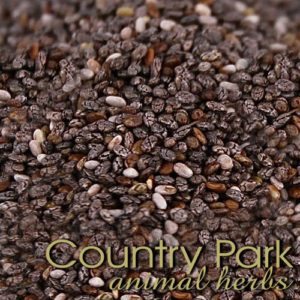 Both chia and flax are approximately one third fat, and both have a high ratio of omega 3 to omega 6 fatty acids (a ratio similar to that found in fresh grass). Although many who promote the benefits of chia claim that it is higher in Omega 3s than flaxseed, independent data sources such as the USDA National Nutrient Database for Standard Reference indicate otherwise, indeed their data reveals that flaxseed has not only a higher overall content of essential fatty acids but that it also has a higher proportion of Omega 3 to Omega 6.

Chia, like flax, is high in protein for a grain/seed, both usually falling somewhere within the 15-25% range. Chia’s protein is a slightly higher quality protein than flax due to its better amino acid profile, and while this is favourable to chia, in the context of a horse who is already receiving adequate protein in their diet but who requires Omega 3 supplementation, the difference in protein quality need not be a big player in the decision for or against either seed.

Chia and flax are both good sources of fibre – their polysaccharides (the molecules that are responsible for the slimy, gel-like properties of the seeds) help to slow the absorption of sugars into the bloodstream, which suggests the likelihood that both/either of these seeds will provide benefit to horses with insulin resistance. At least one clinical study has shown that feeding chia to rats both prevented and reversed insulin resistance that had been brought on by feeding the rats a sucrose-rich diet.

The mucilaginous fibre of both flax and chia is helpful in preventing a build up of sand in the gut of horses.

Both flax and chia contain an array of vitamins and minerals, including calcium, phosphorous, potassium, manganese, copper, zinc and B vitamins. It is oft quoted by the proponents of chia that it is an excellent source of calcium, with phrases such as “Five times the calcium of cow’s milk!” What is usually Not mentioned is that, like flax, chia has even more phosphorous than calcium and thus has a ratio of calcium to phosphorous that is weighted toward phosphorous – the opposite of what is required overall in the diet of humans and horses alike. Thus, while chia is a good source of calcium, other sources of calcium will still be required in the diet to balance out the calcium:phosphorous ratio.

Chia is high in antioxidants, higher than flax. As well as being nutritionally beneficial these antioxidants protect chia from going rancid and provide it with a long shelf life. Although flax does not contain the same level of antioxidants as chia, whole flaxseed has a tough seed coat that protects it seed contents from oxidation during storage.

Once ground however, chia seed, because of its higher antioxidant content, has a longer shelf life than ground flaxseed which ideally is fed freshly ground [see below for further information on preparation and digestibility].

Despite being more highly antioxidant than flax, chia does not have a higher anti-inflammatory rating than flax. They are both categorised as Strongly Antiinflammatory, with flax receiving a higher rating (the rating takes into account the overall effect of a number of nutritional factors, including fatty acids and antioxidants).