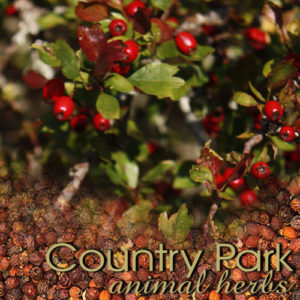 From the time of the ancient Greeks to the present day hawthorn has been regarded far and wide as a heart tonic – and a supreme one at that. During the Middles Ages It was seen as a symbol of hope and taken for many ailments. Considered magical by some, it was pinned to farmhouses, stables and barns to ward off lightning strikes. In China, hawthorn was noted as far back as 659 A.D. for treating stomach disorders, vascular disease and scurvy. Native Americans have also used it as a heart medicine, intestinal aid and general tonic. In the present day, hawthorn is one of the most popular herbal medicines in central Europe.

The berries of the thorny hawthorn shrub/tree appear similar to other fruit from the Rosaceae (rose) family, such as rosehips and crabapples, and, like them, are edible and nutritious. Traditionally the berries have been used in herbal preparations, although modern phytomedicinal extracts have primarily employed the leaves and flowers as it appears they contain a higher concentration of some of the “active ingredients” – bioflavonoids and proanthocyanidins – responsible for many of the cardiac benefits of hawthorn.

While there’s been no conclusive research regarding hawthorn protecting against lightning strikes(!), research has shown that hawthorn extracts improve heart function. Essentially, hawthorn assists the heart to be a more efficient pump. It achieves this by improving the heart muscle’s metabolism – dilating the coronary blood vessels which improves the blood and oxygen supply to the heart, allowing better and more stable, rhythmic contractions. In addition, it is a peripheral vasodilator – opening up blood vessels in the arms and legs, thereby facilitating a better flow of blood throughout the body. The bioflavonoids and proanthocyanidins also act as powerful antioxidants, protecting collagen, blood vessels and other tissue from oxidising damage.

With regard to horses, hawthorn’s effects on peripheral circulation makes it valuable for treating conditions such as navicular and laminitis. Indeed, horses and ponies suffering from these ailments have been observed seeking out the new growth on hawthorn bushes/trees. It also has applications for bleeders and horses suffering heart strain.

It is important to remember that hawthorn, like many herbs, is not a “quick fix”. It takes time for change to occur and hawthorn’s effects are best realised when the appropriate dose is taken over a reasonable period of time – weeks or months. Any application of hawthorn to serious heart issues should be done in consultation with your vet/herbalist.