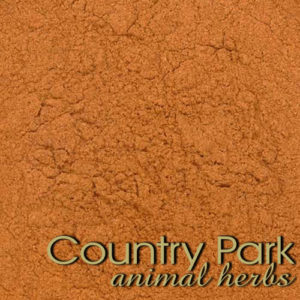 The cinnamon tree is native to Sir Lanka and India and the inner bark is used. The medicinal value of cinnamon is due to its volatile oil, which has stimulating and anti-viral properties. Traditionally used as a warming herb for cold conditions, often in combination with ginger.

Also a traditional remedy for problems of the digestive system such as nausea, vomiting and diarrhoea. Cinnamon is a supporting and strengthening herb for weak digestion.

WARNING: Do not use on pregnant mares as it can stimulate the uterus.