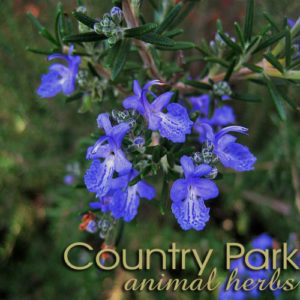 (Rosmarinus officinalis)  Recognised widely as a culinary herb, rosemary has also been used medicinally for centuries. It is an uplifting, stimulating tonic for the circulatory and nervous systems – useful for mild/moderate depression and particularly as a memory aid. It is known as the herb of remembrance. As well as enhancing circulation, including to the brain, it contains a number of chemicals that help prevent the breakdown of the neurotransmitter acetylcholine – a deficiency of which is associated with Alzheimer’s disease.

Rosemary is powerfully antioxidant due to its good concentrations of many antioxidant compounds which, amongst other functions, strengthen capillaries and are anti-inflammatory. In addition, rosemary has antibacterial and antifungal properties; it is a digestive aid – encouraging digestive “juices” and reducing gas; and it contains anti-cataract compounds. Externally, rosemary is used as a wash, compress or in essential oil form (appropriately diluted) for easing arthritic discomfort.

CAUTION: Do not give to mares in foal.