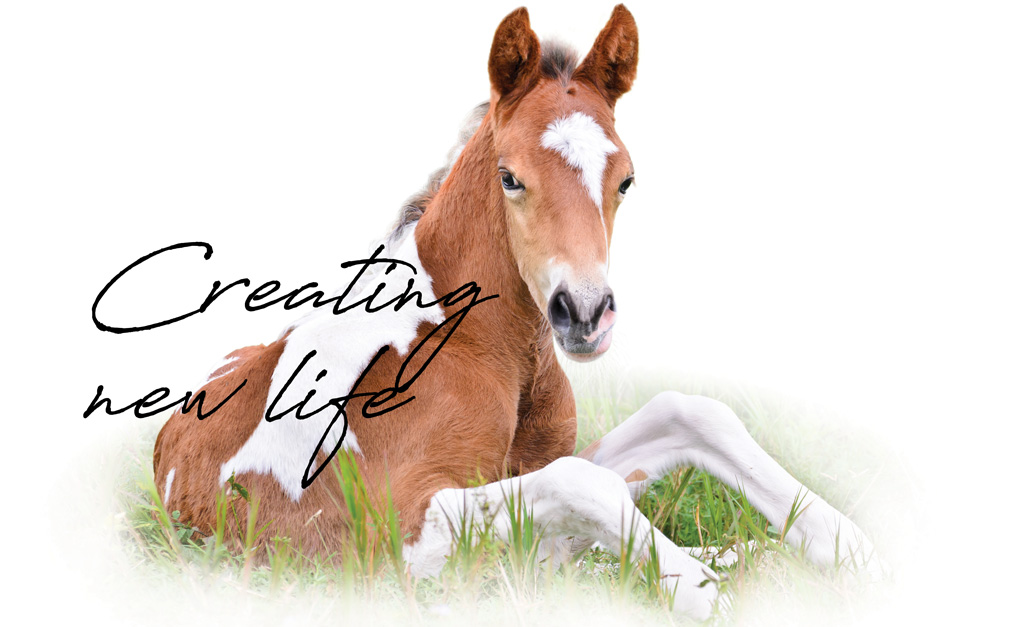 Spring is the time our thoughts turn to creating new life, matching a mare to a stallion or awaiting the arrival of a new foal…all of which can be supported by the inclusion of herbs in the horse’s diet

In preparation for conception, or if a mare needs support to conceive, herbs are ideally used for three to six months prior to serving. They can be used closer to the time of servicing, but where there is a history of issues you want to try and prepare well in advance to increase the likelihood of success.

An even better scenario is that once the mare has had her most recent foal then herbs will be used to aid her recovery and prepare her reproductive process. Pregnancy may be a natural cycle of life but it is not always kind to the body that experiences the strain from both the hormonal changes and the weight of carrying and delivering a foal.

Raspberry leaf is the first herb to consider in a pre-pregnancy mix, and then, depending on how much time you have allowed for preparation, herbs that help strengthen and fortify, such as fenugreek and nettles are useful. If the mare’s cycle has been erratic, chamomile and/or fennel seeds may help. Even chaste tree berry – under supervision – can be used to ‘trick’ a cycle, but if using medications avoid chaste tree berry as it is a herb that does not play nice with pharmaceuticals.

When enough time has been left to prepare the mare there is time to phase-in and phase-out herbs leading up to her being serviced by the stallion. With raspberry leaf, where you begin and end its use will depend a lot on the mare’s history with carrying foals.

STALLIONS
In preparing your stallion for the season, two herbs that can support him with the bursts of energy needed are parsley leaf and rosehips. Parsley leaf is very high in iron, while both parsley and rosehips are high in vitamin C to support adrenal function and recovery after the production of adrenaline. Parsley is also documented as a mild aphrodisiac herb that is useful in supporting prostate health. Another herb useful for supporting stamina is nettles, again high in vitamin C it is also one of the most nutritional general support herbs. If a stallion becomes irritated in his genital area, cornsilk is a useful herb to soothe a swollen or sensitive sheath.

PREGNANCY
During pregnancy there is a lot of contentious material out there on whether to give herbs or not. Most nutritional herbs should be safe, herbs with strong diuretic or emmenagogic actions (stimulating blood flow in the pelvic area and uterus) and some anti-inflammatory herbs are best avoided. With each pregnancy being so individual it is best to work with a herbalist and provide your veterinarian with an overview.

Leading up to the arrival of the foal, raspberry leaf can be reintroduced to the feed four to six weeks prior to the expected due date. Nettle can be introduced two to three weeks before to help encourage good milk flow, and both can be continued well into the first few weeks to months after the foal’s arrival, to both fortify and regenerate the mare and her reproductive system. Chamomile can support the nettles and raspberry leaf and also be used to pass through the milk to the foal if both are stressed, and there is no harm if a foal eats these herbs from the mare’s feed.

WEANING
When it is time to wean the foal, lemon balm is a very useful herb to help with easing the connection between the two. Both mare and foal can have this added to their hard feed. If the mare’s milk is not drying up easily then lemon balm – a member of the mint family – can be added. Peppermint can also be added to assist with this. The lemon balm can be used for the foal also and can be continued for three to four weeks after weaning. It helps the foal rebalance the digestion from the diet changes occurring during weaning, as well as supporting both the mare and the foal’s nervous systems.

Overall the use of herbs that are classed as ‘gentle’ by herbalists can keep your mare, stallion and foal’s’ bodies tuned to functioning optimally.

Herbs are not a one-fix-shop and each pregnancy, at any stage, needs an individual approach. If conception is the goal, allow months to prepare. Support during pregnancy is primarily nutritive, and then after the mare and stallion have produced a healthy foal, their regeneration in preparation for the next season should be well and truly established.

For correct dosage rates on the herbs mentioned in this article please contact Carol or Ruth when placing your order.

Disclaimer: The information provided in this article is for educational purpose only and is not meant to replace veterinary advice or treatment.

Copyright: Catherine Bird, who is also the author of a Healthy Horse the Natural Way, has been an equine natural therapist for 27years working closely with Country Park Animal Herbs for over 13 years offering advice to their clients.