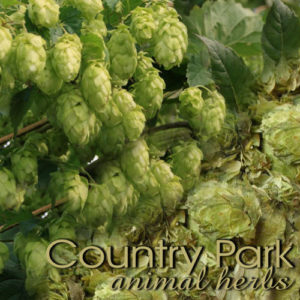 The ancient Romans grew hops as a garden plant and ate the young spring shoots which are reminiscent in taste of asparagus.  English country folk and gypsies in the following centuries would continue to partake of hops in this manner and, as is so often the case, hops made its way into the herbalist’s repetoire via the kitchen – its medicinal value being discovered through noting the effects on people when the plant was eaten as a vegetable.  Hops is a close relative of both stinging nettle and the Cannabis genus, and is native to North America, Europe, and Asia.  It is distinguished by its vine-like leaves and unusual, green-yellow, scaly buds.  The female flowers, called ‘strobiles’, are the parts now used medicinally and in the production of beer.

Hops have always been used to soothe and settle – by calming and toning the nerves in cases of anxiety, insomnia, tension and restlessness.  The sedative action of hops, which has been confirmed experimentally, is due to its marked effect on the central nervous system.  In addition it has been shown to have an antispasmodic action on smooth muscle which explains its use in the treatment of gastric and intestinal spasms.  It also helps to stimulate digestion and trigger appetite.  Oestrogenic substances are found in hops, as well as good antibiotic activity – it can be used externally for its antiseptic properties.  As a sleeping aid, sachets of hops flowers have been put in/under pillows to release a calming aroma, and it can also be taken as a bed-time tea – it has a “pleasantly bitter” taste and a soothing, relaxing calm can be experienced within as little as 20 to 40 minutes after ingesting the herb.

As well as its primary use as a sedative, hops have been used traditionally in India and China for ailments such as headache, indigestion and intestinal cramps; and also by the Cherokee people as an anti-rheumatic, analgesic (it has some pain-relieving properties), and for kidney and urinary inflammation.

For horses, hops’ effects are valuable when help is needed to re-model old habits and nervous attitudes.  It is also indicated for general debility, especially when the animal has lost its appetite and is wasting.  It is the bitter principle of hops, which is well known to beer drinkers, that predominantly accounts for this herb’s ability to stimulate the digestive system.

Please note:  Hops contain oestrogenic substances and could interfere with pre-existing hormone therapy.  Although hops has no known toxicity it can cause contact dermatitis in sensitive individuals.  Hops must not be used in those suffering from depression.