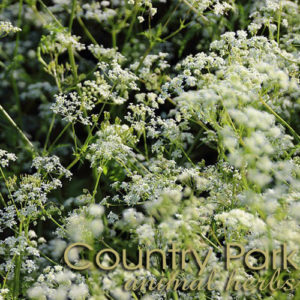 [Achillea millefolium] What’s in a name…? In the case of yarrow, quite a lot… This native European herb’s folk name was “nosebleed” because of its effectiveness at stopping blood flow in first aid situations. In classical times it was called “herba militaris” – the military herb – because it was used by soldiers to staunch their wounds; and its genus name (the first part of its botanical name) originates from the story of the mythical character Achilles’ use of the herb to treat his warriors’ war wounds.

Yarrow is considered a wound healing herb because in addition to its styptic action (stopping external blood flow by constricting blood vessels) yarrow counters tissue swelling and inflammation and helps to resolve bruising. It has also demonstrated some antibacterial action. When treating open wounds yarrow is often used in conjunction with other antiseptic herbs such as calendula or hypericum, or with raw honey (also antiseptic).

Yarrow’s prowess as an external application for injuries is by no means its only talent. Like other herbs classed as bitters, yarrow’s use as a digestive tonic and appetite improver is related to its ability to both promote gastrointestinal secretions and ease spasms in the smooth muscle of the GI tract; and it is this antispasmodic effect on smooth muscle that has also been utilised to treat menstrual discomfort – soothing uterine contractions (cramps) during menstruation. Yarrow’s reputation as a gynaecological herb has been further earned by its ability to regulate the menstrual cycle and either reduce heavy bleeding or restore menstruation when it has been abnormally absent.

Yarrow is also valued as a cold, flu and fever-managing herb. Its diaphoretic and febrifuge effects (promoting perspiration by enhancing peripheral circulation and aiding the body to reduce fever) are able to bring healing relief without unduly suppressing symptoms (as drugs may do).

Amongst its broad range of effects, yarrow has also demonstrated antioxidant, anti-inflammatory and diuretic effects, as well as some analgesic (pain-relieving) activity.

In areas where yarrow grows wild, or amongst meadows and pastures, it is readily grazed by sheep, cattle and horses.

Yarrow can be used to treat horses who have experienced Exercise Induced Pulmonary Haemorrhage (EIPH) in which bleeding occurs in the lungs or trachea during exertion, sometimes becoming apparent when epistaxis results – blood trickles down the nasal passages. These ‘bleeders’ need the assistance of yarrow to improve the integrity of their blood vessel walls, to subdue the bleeding and to enhance peripheral circulation.

CAUTION: Seek advice from a herbalist before administering this herb during pregnancy as it can have a uterine stimulating effect; do not administer concurrently with sedative, diuretic, blood pressure or blood thinning medications without consulting your vet and herbalist. Rare cases of allergic skin reactions are reported in response to yarrow – cease use if this occurs. Extended use may increase skin photosensitivity.